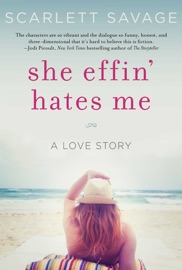 She Effin' Hates Me

Molly has arrived home from Vassar to reveal that she has an important announcement to make. Her mother, Suzanne, is convinced that Molly’s news is history repeating herself — and that she’s about to become a thirty-six-year-old grandmother. Suzanne’s mother, Ava, develops a case of impending great-grandmother fever—that is, when she’s not spying on the new next-door neighbor, Buddy McKinley, who turns out to be a blast from her past.

Decades earlier, Buddy was the business partner of Ava’s late husband, as well as his best friend during the Vietnam War. Ava feels she has good reasons for hating Buddy—she blames him for the fall of their business, an Irish pub that was a staple of the community. The loss not only destroyed her husband but also pushed her headfirst into the vodka bottle.

Suzanne eventually finds out that Buddy and Ava’s past goes back much further than either has admitted. She begins to wonder whether Ava truly hates Buddy, or whether her feelings are much more complicated, as are her own when Molly announces that she’s not pregnant, but gay.

Based on the award-winning play, She Effin' Hates Me is about three women relearning to love one another for who they are … and more importantly, for who they’re not.