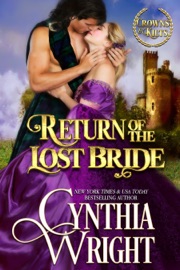 Return of the Lost Bride

A PROUD HIGHLANDER
Darkly handsome Ciaran MacLeod revels in his life as a Highland warrior. By day, he trains with his comrades at Duntulm Castle on the far cliffs of the Isle of Skye, and by night he takes his pick of smitten lasses.

However, Ciaran harbors a family secret that makes him deeply suspicious of love. He’s grateful he doesn’t have to worry about taking a wife, for the castle is efficiently run by Violette, a plain young Frenchwoman who hides under a drab gable hood and reveals nothing of her own past.

SECRETS REVEALED
Violette Pasquiére fled to Scotland to escape a predatory stepfather. On the remote Isle of Skye, she feels safe, tending to the strong Clan MacLeod men who would be lost without her care. The potent attraction Violette feels for Ciaran MacLeod is just one more secret she keeps.

But a threat to Duntulm Castle changes everything, and Ciaran’s elders pressure him to make a marriage alliance that will benefit the clan. Rebelling against their efforts to control him, Ciaran impulsively proposes to Violette instead, setting in motion a passionate series of events that shake not only their future, but challenge their carefully guarded hearts...

"RETURN OF THE LOST BRIDE kept me up reading until the wee hours of the morning! Beautiful imagery and careful attention to detail build Ciaran & Violette’s world, and for a little while we are really there in the 1500's, experiencing their romantic adventure right along with them. I’ve read hundreds of historical romances, and can truthfully say that I enjoy Cynthia Wright’s above all others." ~ Past Romance Reviews