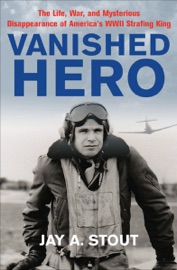 By Jay A. Stout

“A superb, edge-of-the-seat account of [Elwyn] Righetti’s stellar combat career during the final months of the air war against Germany” (Eric Hammel, author of Two Flags over Iwo Jima).

A hell-bent-for-leather fighter pilot, Elwyn G. Righetti remains one of the most unknown, yet most compelling, colorful and controversial commanders of World War II.

Arriving late to the war, he led the England-based 55th Fighter Group against the Nazis during the closing months of the fight with a no-holds-barred aggressiveness that transformed the group from a middling organization of no reputation into a headline-grabbing team that made excuses to no one. Indeed, Righetti’s boldness paid off, as he quickly achieved ace status and scored more strafing victories—twenty-seven—than any other Eighth Air Force pilot.

Ultimately, Righetti’s calculated recklessness ran full speed into the odds. His aircraft was hit while strafing an enemy airfield only four days before the 55th flew its last mission. Almost farcically aggressive to the end, he coaxed his crippled fighter through one more firing pass before making a successful crash landing. Immediately, he radioed his men that he was fine and asked that they reassure his family. Righetti was never heard from again.

Vanished Hero tells a story “worthy of a Hollywood blockbuster . . . It is a fitting tribute to both Righetti and the man who collected his life’s journey” (Military Heritage).

“An excellent biography of a true American hero . . . a worthy contribution to an understanding of the application of air power in the Second World War.” —History News Network

More by Jay A. Stout