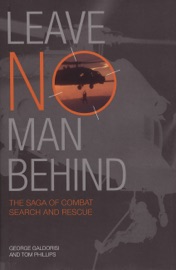 Leave No Man Behind

Beginning with the birth of combat aircraft in World War I and the early attempts to rescue warriors trapped behind enemy lines, Leave No Man Behind chronicles in depth nearly one hundred years of combat search and rescue (CSAR). All major U.S. combat operations from World War II to the early years of the Iraq War are covered, including previously classified missions and several Medal-of-Honor-winning operations. Authors George Galdorisi and Tom Phillips (both veteran U.S. Navy helicopter pilots) highlight individual acts of heroism while telling the big-picture story of the creation and development of modern CSAR.

Although individual missions have their successes and failures, CSAR, as an institution, would seem beyond reproach, an obvious necessity. The organizational history of CSAR, however, is not entirely positive. The armed services, particularly the U.S. Air Force and Navy, have a tendency to cut CSAR at the end of a conflict, leaving no infrastructure prepared for the next time that the brave men and women of our armed forces find themselves behind enemy lines.

The final chapter has not yet been written for U.S. combat search and rescue, but in view of the life-saving potential of these forces, an open and forthright review of U.S. military CSAR plans and policies is long overdue. Beyond the exciting stories of heroic victories and heartrending defeats, Leave No Man Behind stimulates debate on this important subject.